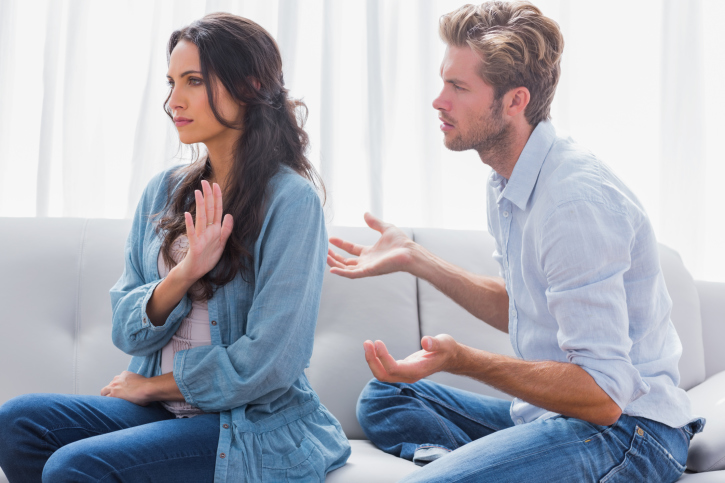 When it comes to dating, there are numerous elements that work together to formulate the entire dynamic of developing a relationship.  The more a person understands each of these elements, the better they will be at navigating the labyrinthine corridors of a romantic relationship.

One element of a relationship that has consistently baffled women is the deceptive behavior of men. Women have invested a lot of energy and effort into discovering the force behind the inevitable lie (Yes, I said “inevitable” and I’ll explain why below).  So, why DOES he lie??

Now, what you are about to read is in no way a condemnation of my fellow men or a male witch hunt.   Hopefully, it will provide a lucid explanation that will, at least, create the foundation for a functional understanding of the male psyche, so that women are better armed with information in those instances in which their mate is lying to them.

To that end, here are the two biggest reasons why your men are lying to you, ladies:

One of the best methods of gaining valuable information on any topic is to get it directly from the source.

According to a feature article in the Huffington Post by David Wygant, the number one reason that men lie is that women don’t listen. Wygant said that he believed that women would find that to be a hard pill to swallow, because they are very good listeners, and he points out that in almost every case they are.

For example, a man may tell a woman that he is not looking to get into a serious relationship because he does not have a substantial amount of time to dedicate to the relationship, and although she acknowledges his statement with an “okay,” she is still going to engage that relationship all in.

Inside of this woman’s mind, she is thinking, “I know that he says he is limited on time, but I am going to love him so well that he will want to be in a committed relationship with me.”

The truth of the matter is that when a man says that he does not want a committed relationship that is exactly what he means. When a man tells you the truth and you refuse to listen, his next option is to begin to lie in order to get your attention.

If the first reason is not the actual number one reason, this one is: When a man perceives that there is no upside to honesty in a specific instance — when he feels that answering a question or revealing some bit of truth will lead to inevitable drama — he will most likely resort to deception for the sake of peace.

It is important for women to understand that men are distinctively different from them emotionally and psychologically. Whereas women see confrontation as a method of resolution, men see it as a form of contempt or disrespect, and there is nothing a man covets more than respect, not even love.

According to Psychology Today, anyone who is placed under enough pressure will lie. There are some psychopathic liars out there; however, the vast majority of lies are the result of some type of motive or incentive. If you want to eliminate the lie, eliminate the motive. The manner in which a woman engages a man at the moment of dissension will have a major impact on his level of honesty.

It is important to understand that offering reasons for the lies that men tell is, in no way, justifying dishonesty in the relationship. This is meant to provide a rational understanding of male behavior in a certain context, so that women are better prepared to engage it when they encounter it. Lying is not a male trait, it is an act of motive; however, in a romantic relationship, the motivational threshold is much lower for men than women.

These may be 2 of the biggest reasons why men lie and deceive in their relationships but there are many more.  Ready to take the next step?  CLICK HERE for the truth you’ve never been told about men.

Michael Fiore talks about why men lie, why he looks at other women, why men cheat, what they want in their sexual relationships, and so much more.

Most importantly, he gives you the tools to learn how to have a relationship where you feel truly loved and adored the way you’re supposed to with a man who really gets you, loves you, keeps you safe, and celebrates you.

Here’s that link again: Why he lies and how to have the relationship you want and deserve!