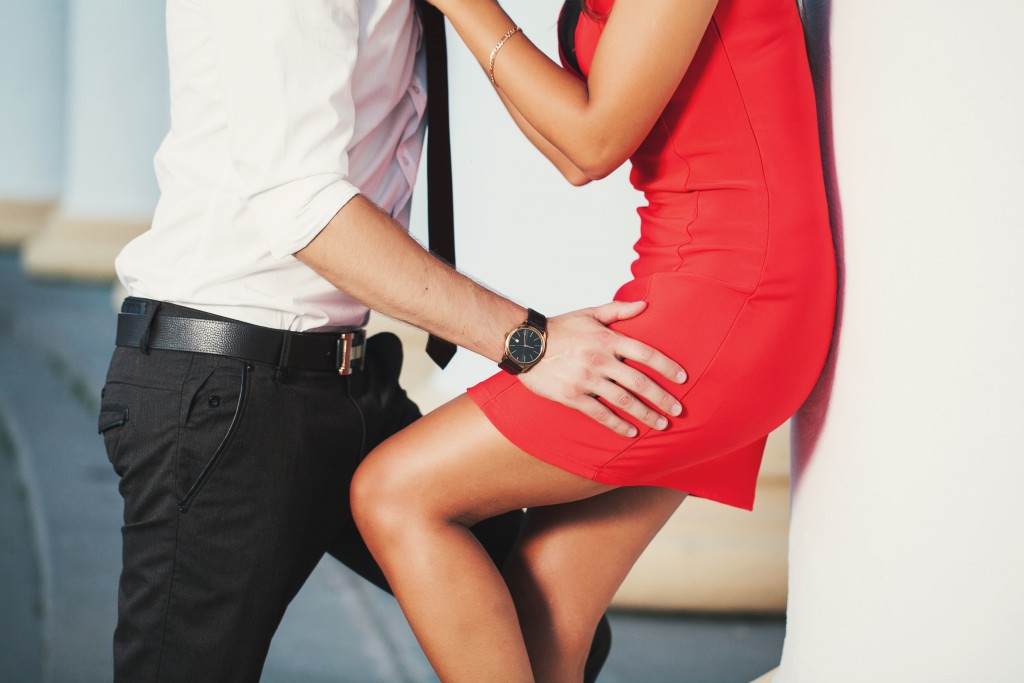 Knowing what your man really wants in the bedroom is one of the keys to great sex (of course he should know what you like too!). But more often than not, women aren’t getting the whole picture when it comes to the true sexual desires of their men.

Well … we’re here to the rescue! After getting some insider information straight from men, we’ve been lucky enough to gather the truth about what men really fantasize about!

Men get super excited when thinking about being watched while having sex with you. Sex in a public location or in a place where someone might come in at any moment is exciting and enticing for men.

It means you have to stifle your moans and move super slow and quietly. Your breathing is close and wet, and your bodies might need to be pressed even closer together in a confined space like a bathroom stall or a coat room. Plus, there’s pressure. When will someone see us? Can they hear us? Do they know? Hot.

Most of the time, he’s in charge, right? But did you know he’d really love to see the tables turned? Yep, he’s yearning for you to put him in his place. Tell him he’s been naughty and put on your best teacher face, or don’t let him move without asking first. He wants to be told what to do, to be the submissive for a while just to see what it feels like, and he hopes you like it too.

An oral surprise to be exact. Just like having sex in public or inappropriate places is a secret fantasy, so is you waking him up with oral sex. No, not jiggling him awake and then going down on him. Literally waking him up with your mouth on him. Go down on him first, and explain later. He especially wants it to happen when he accidentally falls asleep on the couch or on a lazy, sleep-in Sunday morning.

This one’s usually not popular with the ladies either, and again, that’s why he’s not talking about it. But yes, he does want to have sex with someone anonymously. For example, he’d love to meet a girl at the bar and take her home to his place or head up to her hotel room without even knowing her name, then never see her again after a great night of sex. If you don’t like this idea for your man, consider role play. Pick a name, pick a persona. Meet him at the bar. Get a room. You might just like this fantasy too …

And Men Have More Secrets Than Just These

You probably know that men are full of secrets. But they are probably even more filled than you think.

For example, are there things you want to know about your man that you just can’t seem to uncover? Specific questions you have that he always seems to avoid?

Have you been lied to or cheated on in the past by a boyfriend or husband … or maybe even a guy you just started dating?

Whether it’s the sexual positions he privately wants to try, the secrets of his past, what he actually thinks of his ex (are they still in love?), or how he really feels about a future between you two … if you feel you’re not exactly getting the whole truth from your man, how on earth do you uncover it?

This one seems like a good idea to some women, and if you do it right, it can be. The trick is to be gentle. Don’t make sweeping accusations, then ask questions later. If you wildly accuse him of being closed up and a liar, you can be sure he won’t give you what you want.

Social media’s a funny thing. “Likes” and comments seem so benign, but if you look a little further into people’s interactions, sometimes you might see patterns. If you’re worried about your partner not telling you something about who he spends time with or what he’s been up to, for example … check his social media. And no, this option does not extend to hacking into his account or snooping his phone. That’s a breach of trust.

If checking social media doesn’t work, you might consider asking mutual friends or siblings of his if something’s up. Again, don’t breech trust, but if you’re really concerned, talking to someone who also knows him might be helpful.

When women lament about their men not being completely honest with them, they’re usually assuming that whatever they want to know … their partners don’t want to tell them.

You’ll be surprised to learn that that’s not so. And the Secret Survey is proof. This is a program that was designed by a man that teaches women how to uncover all the secrets they so desperately want to get out of men.

Men are dying to tell women their secrets.

But they’re stuck. And only women can unstick them … can unlock their emotions and true feelings.

And you’ll be surprised to find out these things.  What they’re really thinking would blow your mind.

To get to the bottom of them, many women use Secret Survey.

Remember, in the end, men will just tell you what they feel comfortable with. No more.

But there’s a whole lot more underneath the surface of men that you should be dying to get at. Use these techniques to do just that, and see how it transforms your relationships with men.