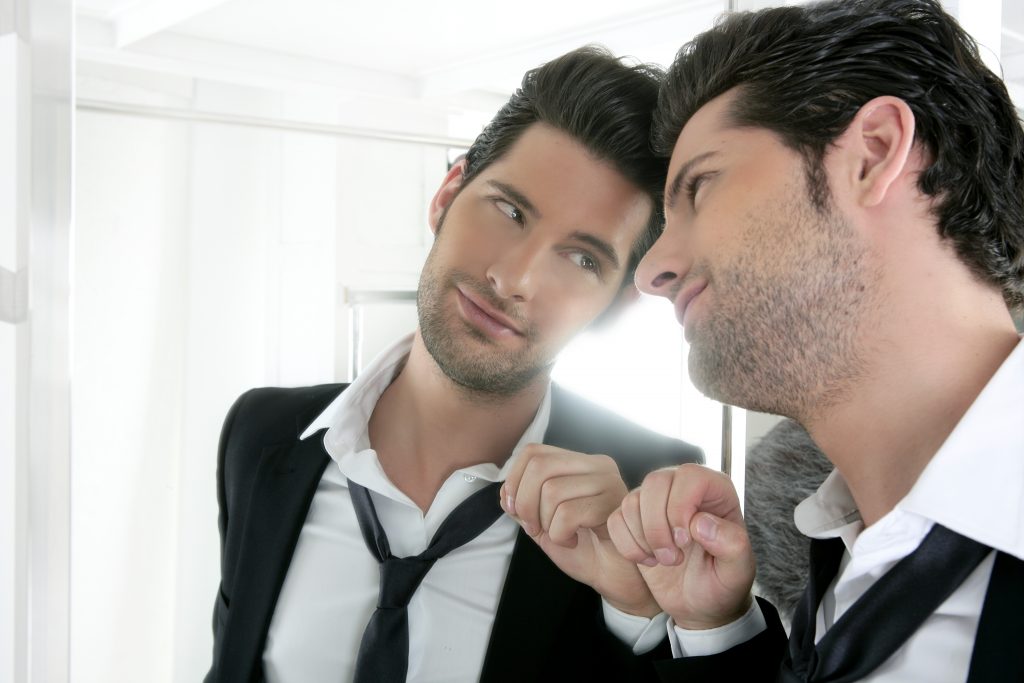 Ok, we’re all a little obsessed with ourselves. And we should be (a little bit), right? When you really think about it, books, movies, TV shows, and people in general keep telling us to have more confidence, be strong, be independent. So isn’t self-obsession a good thing?

The problem happens when someone crosses a line and instead of caring about both themselves and others … only cares about themselves.

In your case, we hope you’re staying stable and have a healthy level of self-esteem and confidence. The problem could lie with your partner, though. Is he self-centered? Is he an egotist?

Moreover, where does that line of confidence end and self-obsession begin? All of this can be hard to discern.

But sometimes—if you are indeed dating an egotist—it’s so hard to notice. When you’re dating a guy who is by all regular standards, a self-centered prick, it’s hard to see through everything that envelopes your relationship. Because there are sure to be good times too.

With that being said … even if you’re having just the slightest glimmer of a question about his character, you need to buckle down and get ready to look for those telltale signs of egotism.

Because you need to know if your dating one of these guys. Being in a relationship with an egotist is terrible for your life. It can put your dreams in shadows, make you lose yourself almost entirely in another person, and stop you from enjoying your relationship and enjoying life!

So … without further ado, we’re here to save the day if this is your problem!

You need to watch out for these 8 red flags.

Are You Dating an Egotist?

Red Flags to Look For

They want to never make a mistake and never have a bad hair day. They think that achieving perfection is possible, and they try for it in vain.

Everyone makes mistakes and should apologize for them when those mistakes have hurt someone. But because an egotist thinks that he can achieve perfection, he doesn’t want to admit he’s made a mistake. In this way, he never apologizes for anything.

So he never says he’s sorry, we’ve established that. But he can’t even agree to disagree when you two fight on non-personal matters let alone admit to being wrong. If you find yourself always admitting you’re wrong (sometimes, even when you know you’re right), this isn’t healthy.

Your issues with a co-worker at work? Your fight with your mother? He doesn’t care unless he’s a character in the story.

Do you temper your own feelings based on his? Do you tell friends that you “might be able to go out Friday” and in your head, think: As long as he’s in a good mood? You’re revolving your life around him.

No one is perfect, but as an egotist, he can’t have anyone knowing that he’s not perfect. In this way, he feels inclined to hide things he’s ashamed of, leaving you in the dark about much of his life.

Egotistical men leave the positivity for themselves, and everyone else seems to be subpar in at least some way. Your man should be able to toss a compliment to a friend, co-worker, or relative without including a “But …” clause after.

No one likes to be criticized, but egotists can’t take it at all. Even if the criticism is gently asserted (and true), they deny it and fly into a rage.

Bonus Red Flag to Watch Out For

* He holds you to impossible standards

Okay, last one. Often, when we think of a narcissist or a completely self-indulged person of any kind, we think of someone who focuses everything on themselves. But in a relationship, the egotism might stretch to you too because you are his partner and thus, an extension of himself.

You need to make sure you’re not getting bullied by your guy. Does he want you to be perfect just like he thinks he is? Does he criticize your clothes, your weight, your work ethic, your beauty, your intelligence?

Regardless of whether you noticed any of the other signs of self-centeredness as well, if this is a problem that’s being happening in your relationship, get out. You don’t want to be with someone who makes you feel bad about how you are.

Your man should be an asset to your life. And in your union, you should share, hopes, dreams, confidence, encouragement, and support. Find a guy who embodies this … and you’ve found a winner.