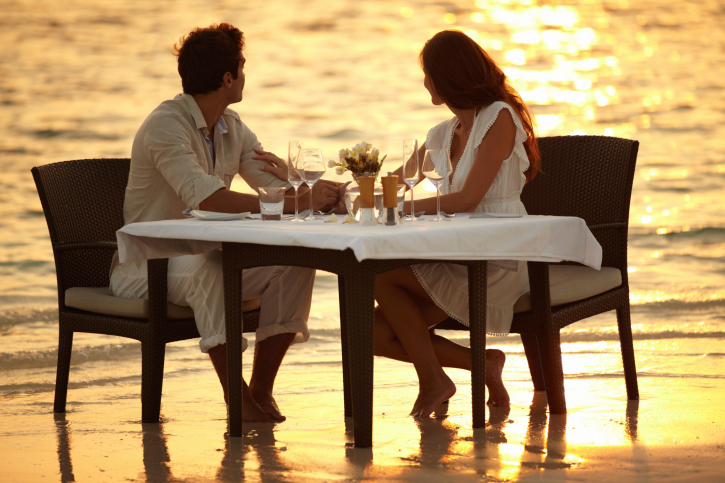 Gentlemen, I want to rearrange whatever concept you may have about ROMANCE. I think that a lot of men are blowing their attempts to win over a woman because of the misconceptions they have about this matter.

Stop me if this sounds familiar. Guy asks out girl on their first date, girl says yes, guy brings out the heavy guns: flowers, chocolates, dinner for two at the most expensive restaurant in town.

Then, girl reacts in the most natural way by FREAKING OUT.

Why? Simple – she’s cornered, pressured and rushed into feeling things that are forced upon her, INSTEAD of being made to experience these intended emotions on her own.

Listen: spending on a date with a budget fit for a blockbuster movie does NOT a make for a romantic night.

What I want to drill into your head right now is the importance of being romantic and how to NATURALLY generate such feelings within her.

The key to this is in optimizing your overall attitude and mindset for romantic awesomeness. Being romantic is not just some mask you can put on and off when needed.

It’s a genuine part of your personality that is present in the different situations you’ll get into with her. Whether you’re approaching her for the first time or out on the hundredth date with your girl, romance should be ingrained throughout.

But what does being romantic TRULY mean? Right from the get-go, she needs to feel your ATTRACTION for her.

Otherwise, you’re at risk of being thrown in with the rest of the other guys who’ve been banished to the PLATONIC FRIENDS zone. Trust me, getting out of the Bermuda Triangle will seem easier by comparison.

So, your lady has to get the general drift that you find her feminine charms hard to resist. So hard in fact, that you feel compelled to get to know her better and know what makes her tick.

What woman wouldn’t be curious (at the very least!) by the fact that some dude oozing with self-confidence is interested in her?

Since you want to make it known that you’re into her and that she’s hijacked your brain, does that mean you have to be crass, vulgar or PUSHY about it? Of course not.

Romance is a matter of ESCALATION. Start off with ambiguous hints about your true feelings until such a time that you can build enough familiarity and comfort to take things further.

As the saying (appropriately) goes, you get the chick by hatching the egg ‘ and NOT by smashing it. Going the traditional route of overkill on the first date is a prime example of ‘smashing the egg’.

Baby steps never hurt anyone AS LONG as you’re consistent with your efforts to turn up the heat and NOT giving the connection a chance to fade away.

A skilled blacksmith knows he can’t hope to make something worthwhile if you strike the iron long after it’s cooled down!

So, let me give you several unconventional ways to turn up the romance without looking like a sap:

No guy got anywhere with a girl without first making her laugh a bit. Laughter is the best tool to loosen her up and make her FEEL GOOD.

Just make sure it’s not the self-depreciating kind of humor because it’s not a good thing for her to laugh (too much) at you. Sure, it’s fine to make fun of something funny that may have happened to you in the past, but don’t make jokes about ‘what a loser you are’ (or anything else to that effect) ‘ she just might believe you!

Learn how to push the boundaries just a little bit.

You can do this by teasing her, making fun of her, and giving her ‘a hard time’ in a funny and sweet way.

Many women appreciate it when a guy pokes lighthearted (read: NOT mean-spirited!) fun at them. When he’s not afraid to test the waters, it says a lot about his self-confidence.

Don’t be afraid to discuss sexual matters as long as it’s within good taste and in the right context.

Of course, you’ll want to handle this with a bit of caution.

You obviously don’t want to talk about sex when meeting her for the first time. But if she brings up the subject during your third date, by all means talk about it in a light and casual manner.

Just keep in mind not to be graphic and don’t flinch or look uneasy when you do talk about it. The point is to let her know that the topic doesn’t terrify you.

Besides, this is all part of building up the tension to a nice, simmering boil. This is where the term ‘slow burn’ takes on a positive meaning.

Women have a natural affinity for expressing and discussing their feelings, whether it’s joy, sadness etc. Use this to your advantage by getting her to talk about her ROMANTIC feelings.

To give you a quick recap of what I said last time, try asking her questions related to romance. Think of a situation you saw or heard about, describe it to her, give your opinion about it and ask HER what she thinks.

This is a great way for her to associate you with the emotions you want her to feel. When she thinks of you, you can bet that it’ll be in a romantic light.

Find a reason to touch her.

Again, this must be done in good taste especially if you’re just getting to know her. By this I mean touching only non-erogenous zones that won’t get you in hot water.

For instance, guide her with your hand on the small of her back (but no lower than that) if she’s going to sit down. Also, touch her hand (just) a FEW times when you’re stressing a particular point during a conversation.

The idea here is to get her used to physical contact with you because building COMFORT is the key to romance. A line from the movie ‘Pulp Fiction’ says it all:

‘This sensual thing’s goin’ on that nobody’s talkin about, but YOU know it and SHE knows it”

Ain’t that the truth! Just because you’re touching her somewhere perfectly neutral doesn’t mean it won’t reverberate deep in her subconscious.

There’s certainly nothing wrong with a healthy dose of ambiguity. In a woman’s mind, red-hot attraction begins with thoughts along the lines of ‘IS he or isn’t he into me??’

You have no idea how GREAT it is to have her thinking about you like that.

While the cheesy notion of romance is out, chivalry is still in style.

Make it a point to open the door for her, whether she’s getting in and out of the car, or going in a restaurant (hopefully not the kind that costs and arm and a leg, but anyway’).

Order for the both of you (with her permission) by recommending a dish or drink that you think will suit her taste. Don’t make a big deal if she prefers something else; let her order what she does want, but do take the initiative to make a decision (in a non-pushy way of course).

There’s a little caveat to all of this though: your gestures should match the level of interest between you two. If you’re on the second date, it’s a good idea to hold a bit back on the mushy stuff. TEASING is more appropriate than going all out with the romance.

If you’re already sleeping together, then it’s pretty safe to say that you can go for the bigger measures of romance. You’ve already reached a significant milestone so your girl now has greater access to your soft side (as compared to when you just met).

(Of course, you’re NOT going to tell her you can’t do stuff for her because she doesn’t deserve it yet’unless you want to end up single real quick. Just give out the necessary amount of affection depending on the time!)

In general, you’ll want to make her feel SPECIAL in a way that’s appropriate to the current state of things between you two. It does take a bit of an eye to spot these subtle differences, but in time you’ll develop a sixth sense about these things.

If you want to accelerate the learning process however, CLICK HERE for the quickest way to MASTERING the fundamentals of sure-fire seduction and really get the fireworks firing.

Maybe approaching a gorgeous woman feels like walking into hostile territory.  No longer do you have to be nervous or feel the gripping fear of screwing up. Take the time. Check it out.