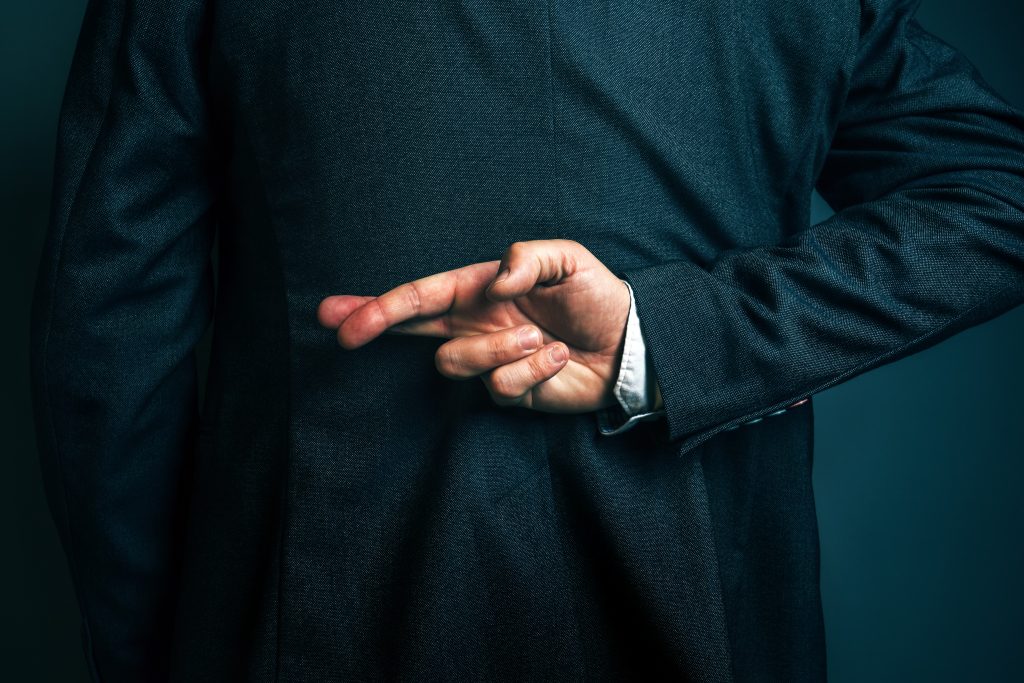 Sadly, all men do lie. Hey, women do too sometimes … but right now, we’re talking about men.

The key is to know exactly where men are typically deceitful. Because oh yes: Men tend to have a trend when it comes to their falsehoods …

The White Lies He Tells

Ok this one’s not always a lie, but sometimes: Yeah. Usually it’s when you “dress for women” instead of for men.

For example, when you wear those gaucho pants with the flouncy top and statement necklace.

Women? Think the outfit’s super fly. Men? Think it’s … sorta funny-lookin. That’s because they would prefer you in a slinky little black dress with stilettos every day. But how boring, right?

He does. Now, this doesn’t mean that he’s pining over her, but come on. You think about your ex, right? From time to time, he probably does too.

The More Dangerous Lies He Could Be Telling You

Well, he probably actually has had his share of rolls in the sack.

Now, if he’s just trying to be more gentlemanly by not “naming names,” then that’s one thing. But do keep in mind that those who have a lot of multiple partners in their past (generally more than you can count on two hands) do have a higher risk for STDs (even if they’re committed to one person now). So that’s something to actually be serious and learn the truth about if you’re engaging in sexual activity.

If he’s saying this while simultaneously wanting to get in your pants, run for the hills. This guy is lying through his teeth. If he was really serious about you, he would figure out a way to drop everything and commit to you.

If the FBI can use little signs and cues to know when someone’s fibbin, why can’t you?

Sure signs he’s a big fibber:

Him: “Just hung out with friends?”

Him: “Just some people.”

When you’re fairly sure he’s lying about something important between the two of you, this is an extremely difficult thing to take. So many questions will be running through your head at this point, but likely, two questions will be at the forefront:

But if you’re asking these questions, it does mean that you’re ready to hear the real, albeit often hard-to-take truth about men in general. This is something that thousands of women never hear in their lifetimes.

And if you want this information (as well as how to use it to get him back and save your relationship), you have to go to the source. And that’s men themselves.

But knowing what your man—or any man for that matter—thinks and feels about you, your relationship or anything at all can be truly difficult because, well, men aren’t the type to expose their feelings. Like, ever.

Fortunately, however, we have a man named Michael Fiore, who is willing to give us this very information. How did he get it?

One, Fiore’s a relationship coach and an author who has been featured on CBS Radio, Fox News, Rachel Ray and many other popular shows and platforms for his amazing techniques to help both men and women improve their romantic lives.

Two, he interviewed and surveyed a large number of men and got their real, actual answers to the questions all women have.

Three, he’s a man himself.

Which leads us to The Secret Survey. This is the program that Michael Fiore created from all the knowledge he has gleaned over his years as a leading relationship expert. This program will tell you all the things that men desperately want you to know about them … but will never tell you.

If you’ve been hit hard by a man who has lied, cheated or just grown completely distanced from you … remember that there is hope. Try The Secret Survey to see how you can turn it all around. Because Fiore doesn’t just leave you hanging. He gives you the information … AND tells you how to use it to make your man fall even more in love with you than you ever thought possible.