What It Means If He’s a Bad Kisser 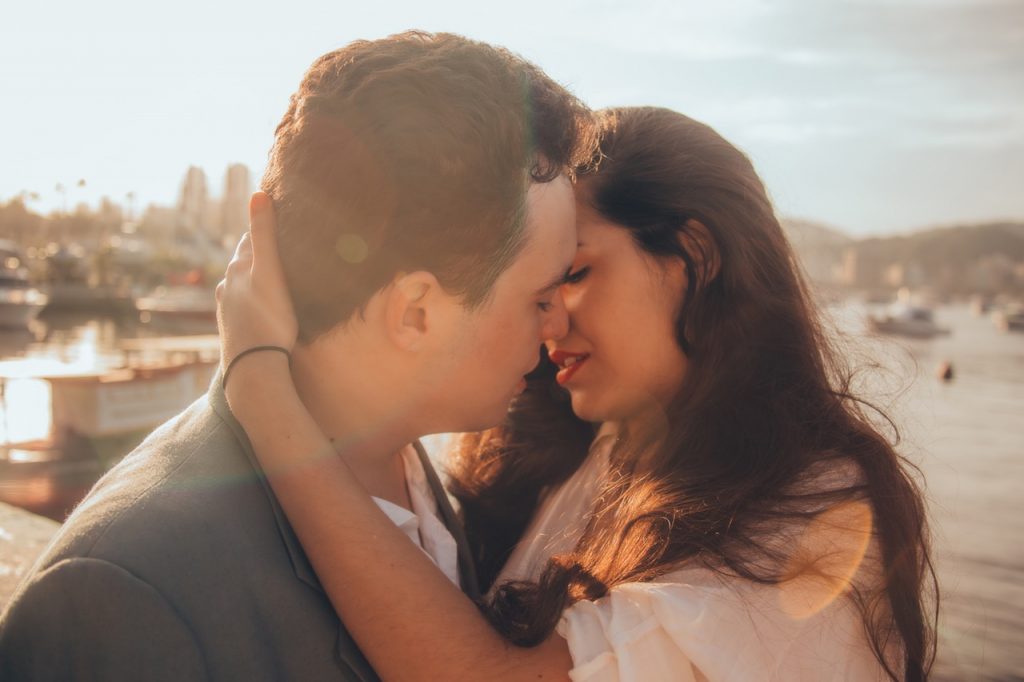 Picture this: You’re currently in the throes of flirtation with an amazing guy.

– You’ve been on a few dates

So, you’ve known each other a while, but recently, things have been heating up even more.

In other words, you two are still kissing virgins.

But the build-up is oh-so-good. You dream of that day when things will change. And you know it’s gotta be coming up. Things have been progressing toward that point for a while now … so it’s only a matter of time.

Then finally. It happens.

You stumble out of a restaurant together, laughing, and you grasp his arm, look in his eyes. He walks you home and brings you to your doorstep …

You lean in, feel his breath on your lips, smell his close scent, annnnd …

His lips feel … sorta dry and sticky on yours, the mechanics are … awkward …

There’s no “melting into each other” or “sinking against him.” It’s just … bad.

You say goodnight, and he leaves.

How on earth could everything have been leading up to this point!? It was terrible.

At this point, things aren’t looking good. But here’s the truth:

a) You don’t have much more time to fix things. He’s likely going to think it was a terrible kiss as well.

b) You have to remember there are two parties involved when you’re kissing.

And what could be very possible is that …. it’s not him who’s the bad kisser …

It could be you.

But before you freak out and start worrying your lovely little head, there’s good news here too.

The fact of the matter is that kissing is indeed essential to attraction and romance. It’s one of our most primal mating instincts. And if you don’t know the keys to a sensuous and wonderful kiss … even if he’s attracted to you initially … the spark and attraction simply won’t be there. And that might end things flat out.

Anyone can learn how to be a good kisser.

Want to be a better kisser? Here’s what you need to know.

You might think that kissing is all mechanics. Put one hand here, the other hand here. Cock your head this way and use X amount of pressure.

Sure, these little tips can help your technique a lot, but the physical is not what kissing is all about. In fact, it’s about more than this … a lot more.

Kissing is about connecting with someone on an emotional level. If you can do that, you’re gold. The trick is to think and feel connected with your guy while you’re kissing him. He’ll pick up on it, guaranteed.

Women have the false idea that men desire aggressive, kinky women who are willing to try all these new techniques and be super sexual.

And while a relationship that’s been going on for two or more years might definitely dive into some different, more kinky, intense techniques for sex, at the beginning, it’s all about being gentle and sweet.

That’s what men want, and it makes you appear like more of a prize than someone who’s overly eager to jump in the sack. Men want to win you over. So, let them.

A lot of women falsely assume that once kissing starts (even that first little peck), everything should just fast-forward to sex right away.

This is what gets women in hot water half the time, and it’s what makes their partners lose interest. Not only do you lose your flirtatious sex appeal once a single kiss leads to immediate making out or even immediate sex, but the relationship becomes much more boring for both parties.

You have to learn to slow things down. There’s a great passage about this in a program called How to Kiss a Man to Make Him Fall in Love. This program by renowned relationship expert Michael Fiore explains exactly how to slow things down when you kiss so that any man will simultaneously be kissing you and falling in love with you.

How to Kiss a Man to Make Him Fall in Love has another excellent section about Kissing Empathy.

Most women aren’t aware of the importance of empathy when kissing. And men aren’t either!

It’s not uncommon for one or both parties to simply “go through the motions.” This is 100 percent wrong. A kiss that you give to your man shouldn’t be like any other that you’ve ever given because it’s with this man. He’s different, so your kissing style should be different too.

And to harness that, you’ve got to connect with him emotionally. This is empathy. It’s almost like pretending in your mind that you’re him. See the two of you kissing “from above,” and figure out your next move. What does he want? Are you connecting?

Again, How to Kiss a Man to Make Him Fall in Love has an entire section on how to do this, and a number of other amazing techniques for getting the man of your dreams to not only notice you and chase after you … but to also fall head over heels for you even before you’ve kissed.

Once your lips do finally meet … he’ll never be the same again.

Oh, and if you’re in the scenario that we described at the beginning of this article? If you’ve already kissed, and He. Was. Horrible.  Remember you still have a limited amount of time to try again, fix your own kissing mistakes, and teach him to be better as well.

But don’t try again before using this advice … and do check out How to Kiss a Man to Make Him Fall in Love for specific points that will make you the best kisser he’s ever had.

Trust hundreds of other women who have taken this advice and used it … he won’t ever want to let you go.